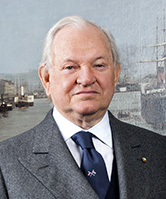 Paolo Clerici, born in Genoa in 1945, married with two children. After studying in Italy and Switzerland he joined the Coeclerici Group - at that time called Coe & Clerici - in 1967, starting with oil products trading and working up to an executive position in 1972 with his appointment as CEO and Managing Director of some minor Group companies. He left Coeclerici in 1976 and set up his own companies first SAIF, acting inter alia as agent of Thyssen Carbometal Inc. and Koch Carbon. He sold his shares in SAIF to his business partner Franco Zucchi and in 1980 started a new company Compagnia Mercantile Internazionale active in importing coal, scrap metal, chemical and food products. He went back to the Group in 1983 as CEO of SIRCO Trading S.p.A. (joint venture between Sears World Trade Inc., IRI and Coe & Clerici). He was also appointed member of the Board of Directors and of the Executive Committee of Coe & Clerici SpA. In 1986 he was appointed Managing Director and one year later Deputy Chairman of the holding company, Coeclerici SpA. Paolo Clerici is the prime mover behind the international expansion of the Group, of which he has become Chairman in 1992. Since 2001, after the conclusion of his second mandate as President of the Italian Ship-owners Association (Confitarma) 1997-2001, Paolo Clerici has decided to concentrate full time on the Coeclerici Group. In June 2003 he was conferred the insignia of Cavaliere del Lavoro (Knight of Labor) by Carlo Azeglio Ciampi, President of the Italian Republic.

On 29 November 2019, the University of Genoa awarded him an Honorary Degree in Administration, Finance and Control, as an “…academic acknowledgement of Cavaliere Paolo Clerici’s efforts in the field of entrepreneurship at both local and national level, which have given an international dimension to the group’s activities and bear witness to the synergy established between the University and the economy” (Paolo Comanducci, Rector of the University of Genoa). 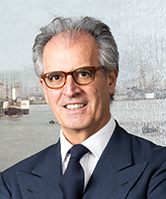 Andrea Clavarino
Executive Vice President
Andrea Clavarino, born in Mar del Plata (Argentina) on 24 January 1957, is married since 1992 and has two daughters. He graduated in law in 1980 at the Genoa University and that same year entered the Coeclerici Group. Andrea Clavarino has held different positions within the Group. He was Director of the Johannesburg office, Marketing Director and Director General of the Trading division. From 2004 until 2018 he has been Chief Executive Officer of the Group Logistics division. He is presently Deputy Chairman of Coeclerici S.p.A. and Member of the Board of Directors of the controlled company IMS Technologies S.p.A.. Besides, he has Global responsibilities for Insurance and Institutional Affairs. Since 1999 he has been the Chairman of Assocarboni, the International Association of Coal Operators, grouping more than 40 international coal operators representing the entire coal value chain, from coal miners to the electricity producers, based in Rome and represented in Brussels. Since 2001 he has been a Member of CIAB, the Coal Industry Advisory Board, the coal consultative body part of the International Energy Agency (IEA) in Paris. 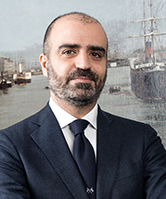 Marco Monterisi
General Manager
Marco Monterisi, born in Milan in 1979, married with two daughters. He graduated in Finance at Università Cattolica del Sacro Cuore in Milan. He worked for more than eight years in PricewaterhouseCoopers (Milan and Dublin office) as Manager in audit and transaction services for tier one firms operating in the banking, finance and real estate industries. He has joined Coeclerici Group in June 2012 as Financial Reporting Manager and after several years of continuous growth through the positions of Group Controller, Group Finance & Administration Director and Group CFO, he has been appointed as General Manager of the Holding Company Coeclerici S.p.A. as of January 1st 2021. He is also Member of the Board of Directors in some subsidiaries of the Group. 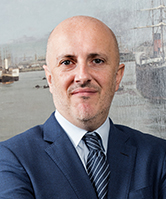 Marco Inghilesi
Group Head of Human Resources
Born in Milan in 1975 by a Tuscan father and a Breton mother, he grew between Rome and Livorno. He lives with his wife in Monza. He graduated with honors in Political Sciences at the University of Pisa in 2002, with a thesis on the differences between the immigration in France and in Italy. He began to work with his brother taking the responsibilities on legal affairs in the family’s company Dalpex. In 2006 he made his first experience in HR and since then he has never left this area of work. When the multinational company Aliaxis bought Dalpex, he was appointed as HR manager of the site of Livorno (taking responsibilities on about 70 employees) and, in less than five years, he became the HR manager of Aliaxis Italian division “Building and Sanitary” with responsibilities on almost 300 employees in two sites (Livorno and Bologna). Since 1st of September 2015 he is the Group Head of Human Resources in Coeclerici and he is responsible for the implementation of the HR strategy of the Group. 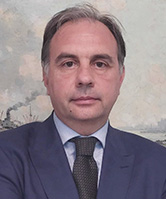 Roberto Guglielmi was born in 1970 and degreed in Economics.

Before joining the Group, he was Director in the Technology line of business of PwC Advisory, firm where he was able to strengthen his skills and abilities thanks to particularly complex projects. Prior to this experience, he worked for Infor, a global enterprise software company, both in Italy and in the Middle East Market.

As ICT Advisor he gained relevant experiences in several sectors such as Automotive, Food & Beverage, Industrial Manufacturing, Pharma & Chemical. He joined Coeclerici as Group Head of ICT in October 2020 to lead the ICT as reliable partner of technologies services supporting the business strategies of the Group and promoting innovation also thanks to a redesign of IT infrastructures and applications.